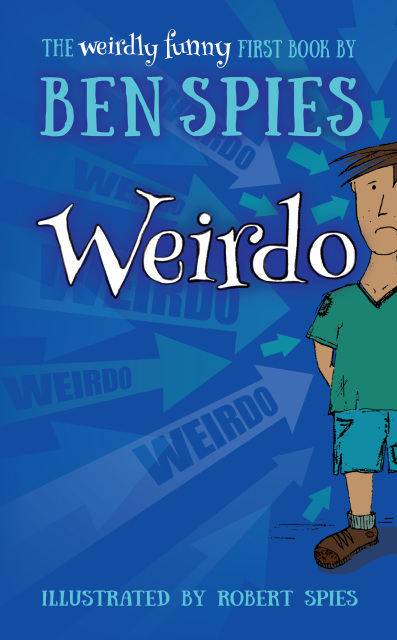 If your children love the funny stories by Andy Griffiths and the Tom Gates series they will enjoy this book. Weirdo is written by a nine year old author from New Zealand who can't stop writing! Inspired by his favourite books - The Treehouse Series - Ben started writing his own stories to entertain his peers with an authentic voice only a child can have. Weirdo is a story about a boy who recently lost his parents. He now lives by himself. He has no friends at school and everyone thinks he is weird... Well, there are some pretty weird things he does sometimes! But can Ugine be happy again? Join him in this little sweet story about friendship, courage, determination and weird adventure!

Young NZ author Ben Spies wrote ‘Weirdo’ when he was nine years old. A wild imagination and a passion for writing were the main ingredients that inspired Ben to start writing books. Since Weirdo, he hasn’t stopped writing and his new book – ‘The Magic Pencil’ followed soon after.

Not Available
If you're outside New Zealand, choose your preferred retailer clicking on link below.
(FREE shipping with Book Depository. E-BOOK available from Amazon)
Check reviews for "Weirdo" below:
Weirdo
Reviewed by: Anita Arlov, Asst librarian at Balmoral School, Auckland

​Weirdo consists of two separate stories, Weirdo and Weirdo 2. In Weirdo, we’re introduced to Ugine, a ten-year-old orphaned boy who lives alone in the house with Goop, the stray dog he takes in. Ugine feels he’s, well, weird (he pretends to phone a friend with a banana) but we soon learn from his actions that he’s kind-hearted (he puts a dollar in the hat for a busker) and just a bit misunderstood.
In Weirdo 2, more happens in two days that you can shake a stick at. Ben is good at dropping hints about what may happen in the future. “Don’t worry” says Ugine as he leaves for a school field trip to Brazil, “I’m totally safe”… A mad jumble of frightening encounters with jaguar poachers, and South American wildlife tumble one after the other and Ben and his mates are forced to think quickly to survive.
Ben‘s spare language impresses, for example: after the taxi crashes “First comes light. Then comes water.” Ben’s imagination and sense of humour shine. For example, to shake off the boss poacher who’s hanging off their escape helicopter, Ben sings a horrible song on loop until the poacher drops off with the torture of it. Everyday speech packed with dialogue propels the action (Quick, swing! Take cover!) Ben uses present tense to heighten the reality, and there are jokes and laughs on every page. “Claire hits Max where it really hurts for a boy…”
The illustrations vary from silhouettes to pencil renderings, and the font size increases markedly to express passion or mood (Help meeeee!!!!) The front cover of a miserable looking Ugine surrounded by school stationery expresses his initial sense of not fitting in.
Ben does well to provide a selfie mugshot and website at the back.
I can imagine Ben’s stories rendered into a graphic novel format.